A 39-year-old woman presented with symptoms of headache and nausea to her physician. She had been operated on 1 year earlier for primary breast cancer, stage I, with no metastases or lymph node involvement, followed by a monotherapy study with trastuzamab because of her tumor’s HER2 positive receptors. Following a negative physical examination further staging included a tumor marker evaluation and a computed tomography (CT) scan for her head. The results showed multiple brain metastases (Fig. 1a, b). 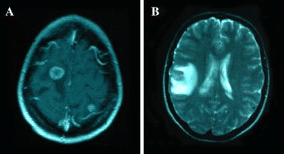 The patient was started on capecitabine and given radiation therapy of 44 Gy with no improvement seen for the first 2 weeks. The severity and inoperability of her condition made using an additional therapy a consideration. An oxidoreductase [plant lipoxygenases (LOX)] inhibitor was applied (Boswellia serrata) which has no known major side effects. The enzyme, LOX, arachidonate: oxygen oxidoreductase (form mammalian LOX) is thought to be responsible for edema in primary brain tumors and present ongoing studies on LOX inhibitors in Germany indicate an overall improvement in response to radiation therapy as well as a decrease in some primary brain tumors seen even without radiation. Although it was not known if LOX inhibitors would be helpful in breast cancer brain metastases it was worth considering in this case since she had not only several large tumors but also additional extremely small tumors scattered throughout the brain. She was immediately placed on a LOX inhibitor. Following 10 weeks of therapy, the patient was scheduled for a new CT since her CEA and Ca 15–3 tumor markers had increased. The CT results showed a complete disappearance of all signs of metastases in her brain (Fig. 2a, b). 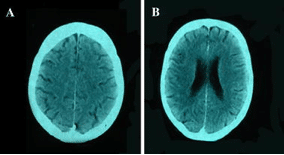 The patient has been maintained on the LOX inhibitor, Boswellia serrata, 3 × 800 mg/day with no new signs of cerebral involvement of her breast cancer for over 4 years, however, there have recently been skeletal metastases which most likely indicates LOX has a limited skeletal tissue involvement in cancer.

Since life expectancy decreases to 3–5 months with multiple brain metastases its appearance is a dreaded complication in breast cancer patients. The incidences of central nervous system (CNS) metastases following breast cancer treatments with trastuzumab are 25–34%. This is an unfortunate complication thought to be a result of the inability of trastuzumab to cross the blood brain barrier in HER2 positive patients [1]. Brain metastases are often treated with surgical resection, stereotactic radiosurgery, whole brain radiation therapy or chemotherapy [2–4]. Even though combination therapies are often applied the survival rate for multiple brain metastases is still very poor [5], and even though usually not very successful, some benefits have been seen with the use of chemotherapy in individual cases [6].

The metabolites of the LOX hydroxyeicosatetraenoic acid (HETE) derivatives in the arachidonic acid (AA) cascade have been shown to inhibit apoptosis, programmed cell death. Inhibition of LOX has proven to be effective in inducing apoptosis. The mechanisms of the LOX inhibitors to promote apoptosis is by decreasing the antiapoptotic gene, bcl-2 [7], and by decreasing the antiapoptotic phosphatidylinisitol-3 (PI-3) kinase-Akt signaling pathway [8]. Furthermore, a link has been shown between the activity of the tumor-suppressor gene p53 and 15 LOX (h15-LO). When the p53 is mutated the h15-LO is increased causing tumor growth and preventing cell death [9]. Similarly in vascular smooth muscle cells LOX metabolites promote vascular cell growth by stimulating cFos, cJun, and cMyc mRNA expression. Additionally linoleic acid activates the ras gene further enhancing cell growth and replication [10].

After seeing the impact of LOX in cancer cell growth it should not be considered unusual that LOX have been found to be elevated in human brain tumors, including meningeoma and glioblastoma. Some of the LOX involved are thought to be present because of the macrophage/monocyte infiltration [11]. Further research studies have indicated that LOX also has a role in prostate cancer [12], pancreatic cancer [13], and breast cancer [14]. Most likely the entire AA cascade and the metabolites of AA and LOX are working synergistically in promoting tumor growth and preventing apoptosis. The successful regression and lengthy remission of this patient’s brain metastases would seem to indicate that the LOX inhibitors were potentially responsible for staving off new CNS metastases and perhaps, may prove fruitful in other cancers mentioned above.

Acknowledgements  This work was supported by The Samuel Freeman Charitable Trust and the M.J. and Caral G. Lebworth Foundation. Special Thanks to Dr. Albert Scheller (deceased 9/’05) of the Leonardis Oncology Clinic in Bad Heilbrunn, Germany for his excellent additional care of this patient, and Dr. Ursula Jacobs for her continued assistance in therapy.